It was 1904.  Life for the folks of Charlottesville was going along pretty much as it had since the town was founded in 1762.  Homemakers busied themselves cooking and cleaning; children played games outside in the warm sunshine; and shopkeepers and tradesmen exchanged friendly greetings as they went about their daily tasks.  No one paid much attention to the jingle of harness and the creak of wagon wheels as horses and mules clip-clopped along the streets.  Those sounds had been a part of Charlottesville life for so long that no one ever gave them much attention.

But all that was about to change.  A strange new sound intruded itself into the citizens’ consciousness:  chugga-putt-putt, chugga-putt-putt, honk-honk!  Curious businessmen set their ledgers aside and strode to the sidewalks in front of their stores to point; children stopped their games and ran to the picket fences around their yards to gawk; and those busy homemakers threw their dish towels over their shoulders and came out on their porches to see the approaching marvel.  The automobile had come to Charlottesville.

At the time the above photograph was made in 1904 there were fewer than 4,500 automobiles registered in the entire Commonwealth of Virginia.  By the time the Municipal Band was formed nearly twenty years later that number had risen to approximately 145,000 passenger vehicles.  Even so, automobiles remained something of a novelty to many people and the roads they were driving on were often little more than rutted dirt tracks more suited to horses, which were still regularly seen on Charlottesville streets and the country lanes of Albemarle County.  Nonetheless, a road building boom was well underway during the 1920s and people’s fascination with the “horseless carriage” paralleled that we see today for computers, cell phones and other technological gadgets.

During the first few years of the Band’s existence the group faced a constant struggle to secure the funds it needed for instruments and music, not to mention money needed for out-of-town travel.  Early in March 1924 French horn player and Board of Directors member Elias R. Newman had an idea.  On March 7th he proposed to the Board that the Band sponsor an automobile show for three days and nights, the proceeds from which would go to augment the Band’s funds.  After some discussion the Board agreed and a committee was formed to plan and execute an automobile show during the last week of March.

The first major auto exhibition in North America was held at Madison Square Garden in New York City on November 3, 1900.  Many others would soon follow all across America, as the production of automobiles mushroomed.  These events showcased the best that car manufacturers had to offer and often included models from small firms that long since have vanished into history.  However, automobile shows in the early years were a major way for car makers to get their products before the public and were usually very well attended.  The hitch for the Municipal Band, though, was how to organize and put on a first-class show in less than a month’s time!

Publicity for the show—the “First Exhibition of the Kind Ever Held in the City” according to the Daily Progress—hit the newsstands on March 18, 1924.  The article went on to declare that “…plans had progressed so far as to insure one of the most interesting and attractive exhibitions ever seen in this part of the country.”  All the local car dealers were enthusiastically on board for the event, quickly reserving all the available space in the Armory in less than twenty-four hours, and each company promised that the models exhibited would be every bit as current as those recently seen at larger shows in Richmond and Washington, DC.  The Progress went on to state that “Charlottesville’s Automobile Show is to be held under the auspices of the Municipal Band which has adopted this means of securing the funds necessary to meet the expense of the trip to Memphis, Tenn., on July 4th, 5th, and 6th, when they will appear as the official Band of the Virginia Division, United Confederate Veterans, at the Grand U.C.V. Reunion.” 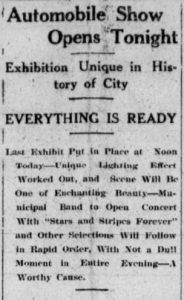 The article went on to say that the interior of the Armory was to be decorated and lighted “…so that the show may have a most attractive setting.”  In addition, there was to be music throughout the afternoon and evening each day of the show, played by the Municipal Band, the Rubins Orchestra, and an unnamed jazz band.  Special novelty attractions were also offered during intermissions “…so that a full evening’s entertainment may be enjoyed by those who do not happen to be interested in automobiles.”  The admission fee for this lavish event:  25¢ per person or not quite $4.00 in today’s funds.

The big show opened to the public at 7:30 PM on Tuesday March 25, 1924 to the strains of the Municipal Band playing John Philip Sousa’s Stars and Stripes Forever.  A standing-room-only crowd of people surged into the Armory to ooh and ahh over the latest model automobiles and admire the strings of specially designed colored electric lights strung overhead.  More than twenty manufacturers were represented, some with multiple models, along with a host of dealers displaying accessories of all kinds.  The Band presented two concerts daily to much applause and requests for encores.  The show continued for two more days and the Progress wrote that “Automobile men whose business it is to visit the largest Shows in the country agree that the local effort surpasses anything of the kind ever presented in a city of less than 200,000 inhabitants.”

It’s not clear exactly how much money the Band made from that first show, but it was enough to insure that they could make their trip to Memphis for the UCV reunion.  Following up on the success of the 1924 event, the Band sponsored automobile shows each March for most of the next decade, the proceeds from which continued to fund the Band’s activities and trips.  The organizers attempted to enhance each annual event with new attractions to entice viewers to attend.  Door prizes grew in value and number.  Booths staffed by attractive young ladies dispensing refreshments and soft drinks brightened the scene and swelled the total financial receipts from each show.  And, of course, the Municipal Band provided music in the form of two concerts each day during the show.

For the 1927 show the Band added an additional day to the event and partnered with the Virginia Public Service Company to arrange elaborate lighting.  This group also added to the entertainment for the show when its recently formed choral club sang.  In addition to the expected array of late model cars, exhibitions of both Greek and aesthetic dancing entertained show visitors.  And perhaps the most surprising feature of the exhibition was a Baby Show!  This event attracted over 175 entrants and the grand prize winner was Margaret Linton, three-year-old daughter of Mr. and Mrs. Harry Linton.  She won a sterling silver cup, fork and spoon set from the Keller and George jewelry shop.

The show concluded with a grand ball that featured Nip Chisholm’s Old-Time Orchestra playing two hours of square dance music followed by another two hours of modern dance music by an unnamed jazz orchestra.  The dance itself proved so popular that the Municipal Band repeated it twice later in the month.  Proceeds from the 1927 show and dances helped defray the cost of the Band traveling to Tampa, FL, for that year’s UCV Reunion, as well as for the purchase of new uniforms for the trip.

One unnamed visitor from out of town was quoted in the Daily Progress March 5, 1927 as follows:  “I have visited automobile shows in New York, Washington, and many of the larger cities.  But this show tops them all as being the best.”  He went on to say that the exhibits were the best he had seen that year and that “…the Municipal Band equaled any band he had ever heard.”

The shows for the next several years were almost carbon copies of the 1927 show and were equally successful, if not more so.  Unfortunately, the stock market crash in the fall of 1929 and the subsequent Great Depression eventually put an end to future lavish automotive displays in Charlottesville.  The Band tried to revive automobile shows in 1935 and 1936, but these shows attracted much less media attention and hoopla than those of the 1920s.  Nevertheless, for the time that the Municipal Band sponsored such shows during the Roaring Twenties, they were among the most well attended and successful events seen in the city—and they helped keep the Band “on the road” to success for many years.