When Sol Kaufman and Ed Joachim began planning for a town band for Charlottesville in the spring of 1922, they faced many challenges and questions.  High among those questions doubtless was that of where would the band make its home?  What kind of facility was needed?  Did such a space already exist in Charlottesville or would one need to be built?  Once Harry Lowe was hired as Music Director for the band, he assuredly also added to and refined Sol and Ed’s thinking as to the kind of space that would be needed for the group.

Today, band rooms are a common feature of a majority of public schools and colleges.  Typically, they consist of a large rehearsal space with adjoining smaller rooms for instrument and music storage, small group practice, and an office for the director.  In 1922 there was no such space in Charlottesville.  What was the Municipal Band to do?

Fortunately for the new band, one of the city’s civic minded citizens stepped forward to offer space in his office building to the Band for its initial meetings.  John L. Livers, CEO of the Charlottesville and Albemarle streetcar line and local power company, provided a room in his facilities at the corner of Ridge Street and West Main Street to the Band.  It was here that Harry Lowe and his assistant Henry Rubin initially taught the new bandsmen the rudiments of music while they awaited the arrival of their instruments.  Mr. Livers himself was never a member of the Band, but he supported it wholeheartedly and the Band thanked him for his generosity and encouragement.  This building still stands today. 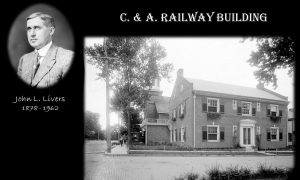 Once the Band’s instruments arrived in the fall of 1922, the men needed a larger space to hold rehearsals and to learn the rudiments of marching.  It was Harry Lowe’s goal for the organization that they would present a public concert within six months of the men receiving their instruments.  It was an ambitious goal, and with winter coming on, it was imperative that the Band have a secure and warm space in which to practice.  Where could they go?

The answer was to the old City Armory that stood on Market Street about where the Market Street Parking Garage is now.  This venerable old building offered the Band rehearsal and storage space, along with a large open room in which to practice marching out of both the elements and public scrutiny.  The building would serve the Band for many years and also would be the site for the automobile shows the Band would host as fund raising events in the years ahead.  The building was far from ideal, being drafty and chilly during the winter, hot and sticky during the summer, and at times poorly lighted—but from its humble space came an award-winning band that traveled throughout Virginia and the southern United States to much acclaim, as well as providing entertainment to the citizens of Charlottesville and Albemarle County. 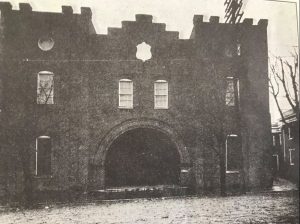 Over the years the Band would meet and rehearse in a variety of spaces, including the C&A Railway Building, both the old and new armories, a few church social halls, and the Lane High School Band Room.  When the city completed a new high school in 1974, the Municipal Band continued occupying the old Lane High Band Room for rehearsals and storage, as well as presenting concerts on the adjacent auditorium stage.  The school building itself was eventually sold to Albemarle County for use as an office building.  During the conversion from school to office space, the Band temporarily moved to nearby Burley Middle School and shared rehearsal space with its band.

The Municipal Band would happily have utilized the old Lane High band space indefinitely, but by the mid-1980s it was clear that the County had designs on the space for other purposes.  The large rehearsal room was converted to office space and the Band’s library and equipment storage was moved out.  Band member Joe Goldsmith constructed a “temporary” wire enclosure on the auditorium stage for equipment storage and the Band’s library and administrative functions were crammed into two remaining small offices adjacent to the stage.  The Band would rehearse and perform on the auditorium stage for the next fifteen years, never entirely sure when it might again be asked to vacate even that meager space and be required to move elsewhere.

In the fall of 1986 the Band’s Board of Directors, urged on by Music Director Jim Simmons, began the long an sometimes arduous task of seeking a true home for the Band.  Realizing the need for a permanent facility to house the Band and the need for a suitable outdoor performance center, the Board began planning and fund raising for a combination rehearsal facility and community outdoor stage.  The vision was to provide the Band with a modern space tailored to the Band’s needs, as well as providing the Charlottesville community with an attractive and functional outdoor performance space that would serve the needs of all arts organizations in the City and County.  The Board’s search for a suitable location for this facility led them to McIntire Park, where the Band traditionally played 4th of July concerts every year.  Their choice also tied into the City’s scheduled renovation of the park to make it a more “family oriented” facility.  To this end and to facilitate fund raising for the project, architect and Band member Joseph C. “Jack” Laramore, Jr. created plans for a facility that included space for the Band on its lower level and an outdoor stage with dressing rooms and stage lighting on its upper level.  The building would face a hillside where audience members could sit to listen to concerts, watch plays and other forms of outdoor entertainment. 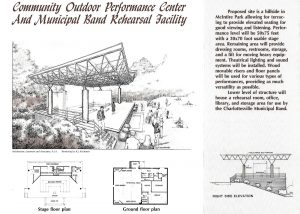 Prior to announcing the project to the public, the Band had received an anonymous donation of just over $80,000 toward its goal of securing a permanent home.  Band members and others contributed an additional $20,000.  The remaining estimated $400,000 needed would be sought from foundations, businesses, organizations and the community at large.

Everything appeared to be set for launching the project in the summer or early fall of 1987.  Then the City, which had previously appeared to be on board with the Band’s proposed move to McIntire Park, unexpectedly withdrew permission for the Band to use the park site that had been chosen.  The Band found itself back at square one—still without a permanent home and once again searching for a suitable space.

Over the next several years the Band examined various locations and existing buildings as possible sites that it could purchase and renovate for its own needs.  None were suitable for a variety of reasons.  During this time another arts group began the process of seeking funds and partners interested in renovating the Paramount Theater located on the Downtown Mall.  Their idea was to revive the old movie theater and expand its role to include performances of many kinds, there being relatively few auditoriums in the community outside the public school system.  As part of their planning, the Paramount invited the Municipal Band to partner with them and offered some of its basement space to the Band for rehearsals and storage.  The Band examined the available space but quickly decided it was unsuitable for a variety of reasons and declined to partner with the Paramount.

During this same time period a second group sought to rejuvenate another of downtown Charlottesville’s former movie houses, the Jefferson Theater.  Also located on the Downtown Mall, this establishment also offered the Band some rehearsal space and access to its stage for concerts.  Once again, after examining the space the Band found the theater unsuited to its needs and declined the theater’s offer.

It became increasingly clear to the Band’s Board of Directors and to President Tom Bibb that in order to have the kind of facility it truly needed, the Band would need to purchase land and build its own custom-designed space.  Such a project would require a huge commitment from the Band’s members in terms of both time and treasure.  To purchase land and construct the sort of building the Band needed and which would serve its needs well into the future was projected to cost close to half a million dollars.  Many members felt this was an impossible task.  But a few visionary members pushed the idea and the Board voted to proceed.

President Bibb, himself a commercial real estate broker, located an available space on Fifth Street Extended near the Willoughby Square Shopping Center.  The Band utilized much of its available capital to buy the land required and broke ground on January 16, 1992.  Site preparation soon followed.  In the summer of 1993 the Band announced a two-year $500,000 fund raising program.  Music Director Jim Simmons, the Board of Directors and others began the arduous task of raising the remaining funds necessary to actually construct the building.  Fund raising and construction would actually take another eight years.

From the time the decision was made to construct its own facility the Band’s Board realized that raising money solely for a band rehearsal hall would be difficult.  Potential donors and partners needed something more to entice them into supporting the overall effort.  Now that performance space in the city was expanding, what was left lacking?  The answer was rehearsal space.  To that end the Band designed and touted its rehearsal hall as a versatile space arts organizations of all types could use.  Additionally, the building also would have office and rental spaces that other arts organizations or suitable tenants could rent if they needed space on a longer-term basis.  To emphasize this multi-purpose intent, the Band marketed the new building as the Municipal Arts Center, a space that would be open to any arts organizations in the community that wished to utilize it. 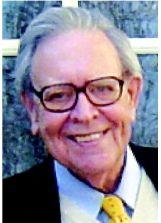 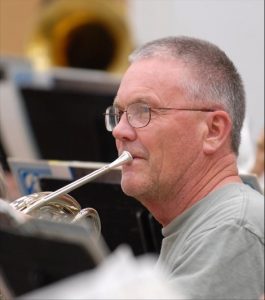 Once again the Board asked Band member Jack Laramore, Jr., (photo left) to design the building, and he created plans for a three-story structure plus usable attic space.  The main floor consisted of office and library space for the Band plus a rehearsal hall and instrument storage space.  The floor of the rehearsal hall was specially designed to accommodate dance groups as well as instrumentalists and the room could also serve as a recital hall for soloists and small ensembles.  The lower level of the building provided storage space with a garage entrance as well as a multi-purpose room with kitchenette for meetings and social events.  The upstairs spaces held a board room, several individual practice rooms and rentable space for small businesses.

The Band hired another of its long-time members, French hornist and contractor Joseph M. Goldsmith (photo above, right), to construct the facility.  To accelerate construction the Board made a leap of faith by securing a commercial loan sufficient to cover construction costs while still in the process of raising funds through grants and donations from members and the public at large.  By the spring of 2000 the new building was essentially complete and on May 18th of that year the Band held a “rehearsal” in the new building to test its acoustics.  Based on the results of that test, a few remaining tweaks were made to the space and the Band took occupancy of the building in early June, holding its first official rehearsal in its new home on June 13th.  The Band’s 78-year search for a permanent home was over at last. 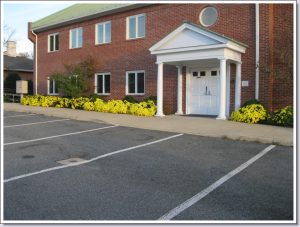