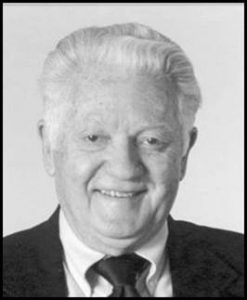 It was a Saturday afternoon in 1941.  A young boy sat on the floor in front of his family’s console radio.  The United States Marine Band was presenting a concert from Washington, DC, and the youngster was impressed and intrigued by an outstanding solo played by one of the Band’s fine clarinetists.  After the piece concluded, the boy told his parents confidently “That’s the instrument I want to play some day!”

That boy was Jimmy Simmons, and in just a few more years he would fulfill his childhood dream of learning to play the clarinet, complete a college degree in music, and go on to enjoy a long and rewarding career as both a band director and a player.  And one day he also would become the sixth Conductor and Music Director of the Municipal Band of Charlottesville, his hometown community band.

James William Simmons was born on April 1, 1929 in Charlottesville, Virginia, the only son of John William Simmons and Bessie Mae McDonnell Simmons.  He graduated from Lane High School in 1947 and went on to earn a Bachelor’s degree cum laude in Music Education in 1951 from Concord College in Athens, West Virginia.  While at Concord College Simmons served as Principal Clarinetist and Librarian for the Bluefield West Virginia Symphony Orchestra.  He also did part-time radio announcing at stations in both Charlottesville and Princeton, WV, during his college years.  In 1959 he earned a Master of Education Degree with a major in Music Education from the University of Virginia.  After serving for a year as band director at Meadow Bridge High School in Meadow Bridge, WV, Simmons returned to Charlottesville permanently.

Back in his hometown, Jim first worked in sales at the Charlottesville Music Center and Roberts Piano Company from 1952-1956.  In July 1956 he became the band director at Albemarle High School, a position he held until 1971.  That year he became the Fine Arts Coordinator for the Albemarle County Public Schools, which position he held until his retirement from public school teaching in 1984.  He also served as choir director at the Thomas Jefferson Memorial Unitarian Church from 1953-1966 and as director of bands part-time at the University of Virginia from 1966-1969.

As a native of Charlottesville, Jim was aware of the Municipal Band all his life.  His first memory of the Band was of attending one of the Band’s outdoor holiday concerts in Lee Park as a seven year old boy in 1936.  The Band was seated on a wooden bandstand facing Market Street.  Ordinary light bulbs illuminated the night scene.  It was very cold and a light snow was falling as the Band played Christmas carols.  Despite the weather, the assembled crowd greatly enjoyed the festive music as they sang along to the familiar songs.

Growing up, Jim got to know many of the men who were members of the Municipal Band.  He clearly remembered seeing and hearing Harry Lowe, the Band’s first conductor, play his cornet during concerts.  Jim took clarinet lessons from the Band’s third conductor, Emil Rada.  Mr. Rada invited sixteen-year-old Jim to sit in with the Band at one of its rehearsals.  Jim acquitted himself very well, but after the rehearsal was over, Band President Dallas Bailey took the young musician aside and told him that although they had enjoyed having him play for the evening, it might be better if he didn’t join the Band regularly until “he was of age”.  In those days the group was still a pretty rough-and-ready bunch, more like a sometimes rowdy fraternity than a group of refined musicians.  Simmons knew exactly what Mr. Bailey meant, and he would not rejoin the Band until the summer of 1948 when he was nineteen.   Thereafter, he remained a member of the Band for the rest of his life.

When Jim became the band director at Albemarle High School, his mentor Sharon Hoose had already been guiding the music program at Charlottesville High School for fifteen years.  A year later Hoose became director of the Municipal Band, and thereafter the two men became close colleagues and friends.  Simmons quickly found himself solo clarinetist in the Municipal Band and also served as its assistant conductor.  And he often employed his former skills as a radio announcer to serve as the Band’s “voice”, imparting to concert goers information about the Band and the pieces they played on concerts.  His mellifluous baritone voice and friendly good humor quickly made him an audience favorite.

When Sharon Hoose stepped down as Music Director of the Municipal Band in early 1980, Simmons was the logical person to succeed him.  He immediately set out to propel the Band to new heights of musicianship and to introduce to both players and audiences an expanded repertoire that built on the familiar songs of the past while adding much popular new music of the day.  Over time the Band’s skill levels increased dramatically and audiences swelled in number and loyalty. 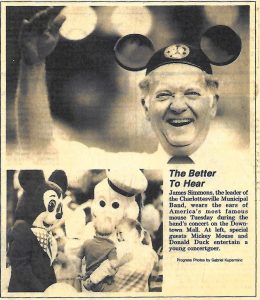 While retaining the Band’s long-standing summer concert format, Simmons instituted or revived other features to broaden the Band’s appeal to its audiences.  He took the Band on the road to nearby cities such as Richmond, Washington and Fredericksburg, introducing the Band to new audiences in those places.  He instituted children’s concerts to attract more families with small children.  Fall and spring concerts were added to the schedule, along with an annual December extravaganza billed as the Band’s “holiday gift to the Community”.  This latter event often featured an elaborately decorated stage, singers and dancers, and, of course, a guaranteed “White Christmas” with on-stage snow.

Perhaps the most significant and lasting thing Simmons accomplished during his long tenure as Music Director was to secure for the Band a permanent home.  In the fall of 1986 it became clear that the County wanted for other purposes the band room space in the County Office Building (the former Lane High School) that the Band had been using for rehearsals.  Simmons and the Band’s Board began searching for usable space elsewhere that it could purchase.  Nothing presented itself that was both suitable and affordable.  In a bold move led by Simmons, the Board decided to construct a building designed specifically to meet its needs.  Fund raising for the project also began in earnest, and Simmons became one of the main champions of that effort.  During that time he became known throughout Charlottesville as “Mr. Municipal Band” for his tireless work raising awareness of the Band and its needs, as well as funds for the project.  All that hard work paid off in the summer of 2000 when the Band was finally able to move into The Municipal Arts Center, its brand new home on Fifth Street Extended.  (The facility is now known as The Charlottesville Band Building.)  Without Jim Simmons’ leadership and encouragement it’s doubtful this goal of building a permanent home for the Band would’ve become a reality.

Another significant thing Jim encouraged and fostered during his tenure was to encourage various members of the Band to pursue composing and arranging music for the Band.  During the years following Jim’s appointment as Music Director a number of Band members asked Jim to try out various pieces they had written, and he was always happy to do so.  Often, these same pieces eventually found their way onto concert programs, generally to the enjoyment of the Band’s audiences.  Relatively few community bands have composers-in-residence and the Municipal Band, with Jim Simmons’ encouragement, has been fortunate to boast at least half a dozen. 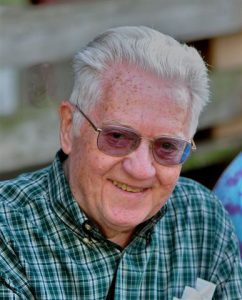 In 2006 Jim decided the time had come for him to retire from active participation in the Band he had devoted much of his life to.  He conducted his final concert as Music Director on April 24, 2007, leading the Band in a program of his favorite pieces before ceremonially turning over his baton to his successor, Steve Layman.  But retirement didn’t mean Jim left the Band altogether.  During the following decade he continued as Music Director Emeritus, occasionally leading the Band as a guest conductor, working with the Band’s web pages, and serving as an advisor to the Band’s Board of Directors.

One of Jim’s most significant and lasting accomplishments during this period was collaborating with Band supporter and benefactor the Rev. Dr. Genevieve Murphy to establish the James W. Simmons Solo Competition and the Rev. Dr. Genevieve Murphy Scholarship for Young Musicians.  This annual event has benefitted nearly a dozen area high school students so far, several of whom have gone on to become professional musicians.

Also during his retirement Jim avidly pursued one of his non-musical activities:  photography.  He joined a local camera club and quickly rose to prominence in the club, serving four terms as its president and regularly winning awards for his landscape and other photos.  Seeking the perfect photograph, Jim spent many happy hours exploring the local area with various friends, enjoying his new hobby and reminiscing about his many past musical adventures.

Active as he was and always had been, age and illness finally caught up with Jim in his mid-eighties.  Diagnosed with kidney cancer, he fought the good fight for almost two years before his death on March 23, 2016 at age 86.  A few of his best Municipal Band friends were at his side at the end.  “Mr. Municipal Band” was laid to rest on March the 29th in Charlottesville’s Riverview Cemetery beside his beloved wife, Betty.  The Municipal Band—indeed, the Charlottesville community at large—had lost one of its longest serving and most influential members, one who will never be forgotten by all who knew him and whose legacy will live on for as long as the Charlottesville Band may continue.  One of Jim’s good friends, Thomas W. Hurlburt, may have said it best:  “Perhaps no one from this community in this generation has brought music more comfortably home to all the diverse public here than has James W. Simmons.” 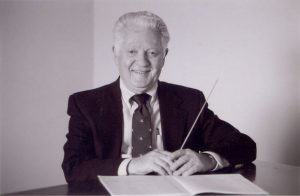