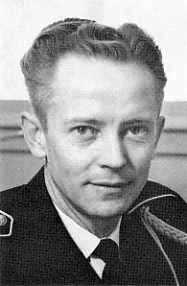 Music Director Marlin Brown left Charlottesville and the Municipal Band for California in March 1957 after conducting the Band for six and a half years.  Once again the Band’s Board of Directors was tasked with finding a new Conductor for the Band—and once again they didn’t have to look far to find just the man for the job.  Early in March 1957 they appointed euphonium player Sharon Hoose as the Band’s fifth Music Director.  He would serve in that capacity until February 1980 and would do much to lead the Band well into the modern era.

Sharon Bernard Hoose was born on April 12, 1912 in the small town of Atlanta, Illinois, located almost exactly in the middle of that state.  His parents were Milton M. Hoose and Dell Yocom Hoose.  While growing up, Hoose did not plan to pursue a career in music.  Rather, he hoped to become a commercial artist.  However, along the way he also developed a love for music.  Hoose himself recalled that during his family’s brief stint living in Sacramento, California, at age five he played in a local drum corps and became enamored of the bands he saw and heard there.  He began playing euphonium in the 5th grade.  During high school, he entered a solo contest and as a result won a college scholarship to attend Illinois Wesleyan University in nearby Bloomington, where he majored in music.

While a student at IWU, Hoose  played trombone and euphonium in various dance bands, orchestras and municipal bands to help fund his college education.  Many of these paying gigs earned the young musician as much as $4.00 a night—“good money in those [Depression era] days” Hoose would later recall.  While at IWU Hoose also became a member of the Phi Mu Alpha National Honorary Music Fraternity and the Phi Kappa Phi National Honorary Scholastic Fraternity.  Hoose would go on to earn both bachelors and masters degrees in music from Wesleyan.

After graduation, Hoose accepted a job as Director of Music for the Buffalo, Kansas school system, where he taught music and art, directed the school band and chorus, and also conducted a Sunday school orchestra and church choir, as well as performing occasional solos.  “If that’s teaching, I didn’t want any part of it!” he later recalled.  He stayed in Kansas for one year, made a thousand dollars, bought a car, a trombone, and a typewriter and returned to Illinois with $ .50 in his pocket.

Back in Bloomington Hoose enrolled in graduate school at IWU, from which he would ultimately earn his masters degree in music.  While a graduate student, he heard about a job opening in Front Royal, Virginia.  He applied for the job and got it, and from 1936 to 1941 he served as band director at both Randolph-Macon Academy and Warren County High School in Front Royal.  He met and married Front Royal native Louise Shirey in 1938.  They would have a son, David, and a daughter, Sharolyn, both of whom would become talented musicians and play in the Municipal Band as student members.

In 1941, one year after the then-new Lane High School in Charlottesville opened, its band director Gaylen Strunce was drafted.  Hoose was appointed to replace him.  He would go on to serve as Lane’s band director and later coordinator of music for Charlottesville Public Schools for almost forty years.  He organized Virginia’s first All-State band competition in 1942 with thirteen bands participating.  He was also one of the founders of VBODA, the Virginia Band and Orchestra Directors Association and was its second president.  And he also helped found VMEA, the Virginia Music Educators Association, serving as its president from 1946-1948.

Hoose was one of 66 musicians from across the United States to receive the MAC award from First Chair of America – The National Yearbook for Outstanding Bands, Orchestras, and Choruses – Honoring First Chair Members and also received an entry in the prestigious publication Who’s Who in Music.

By all accounts Hoose was a fair but demanding teacher.  He set high expectations for every student and required students to practice regularly, be punctual and to participate in activities that insured the band ran smoothly and efficiently.  He didn’t nag his students or raise his voice to them, nor did he try to be their “friend”.  He simply demanded excellence, and year after year the band received superior ratings at clinics and festivals.  In addition to conducting, Hoose also employed his latent art skills, designing posters and programs for the band and supervising students in crafting backdrops for concerts.  He also composed and arranged music for special occasions.  He retired from his post as band director in 1974, although he continued to serve as the Coordinator of Music and Arts for the Charlottesville Public Schools until 1976.  After his retirement Lane High School Band alumni created an award in his honor, given each year to a junior band student selected as the best musician in that class. 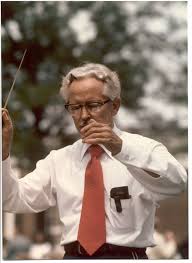 pieces to the Band, an average of 20 new pieces every year during his twenty-three year tenure as Music Director.  This was over 100 more new pieces than all of his predecessors combined!  These pieces introduced Municipal Band performers and audiences to an array of up and coming American composers for band in many genres, as well as to Broadway show music, movie and television themes, marches and other gems of American band music past and present.  Nor did Hoose neglect familiar band transcriptions of classic overtures and popular music from earlier days. In short, while retaining the best of the past, he widened the horizons of the Band to include many new tunes from the fifties, sixties and seventies.

Perhaps the most significant and far-reaching thing Hoose did for the Municipal Band, of course, was to admit women into the ranks of the Band’s musicians.  Although the effort to admit women into the Band had begun prior to Hoose’s tenure as Music Director, it was he who pushed the work to conclusion barely three months after assuming his post as Conductor.  Women first entered the Band as players on July 9, 1957.  Over the years since, hundreds of talented female musicians have performed with the Band, greatly adding to the quality of its performances and enriching the organization in many ways.

It was also Hoose who in 1961 first admitted student members into the Band.  Dozens of talented high school and college students have performed with the Band in the decades since, a number of them going on the pursue careers in music themselves and on occasion returning to become adult members of the Band.

Toward the end of his conducting career Hoose suffered from a number of chronic health issues.  He was plagued by bursitis in his shoulders and also experienced heart trouble.  This latter problem dramatically manifested itself on June 17, 1979.  The Band was invited to perform for Virginia Day festivities at the Wolf Trap Farm Park for the Performing Arts near Washington, DC.  It was a hot, humid day and shortly after the Band’s arrival at Wolf Trap a downpour forced them to relocate to the dining tent for their performance.  During their performance of the Finale to Dvorak’s New World Symphony, Hoose became ill and nearly collapsed on the podium.  Assistant Conductor Jim Simmons immediately took over conducting duties while Hoose was assisted back stage and ministered to by Band member Vince Giuliano, a physician.  Some reports later indicated that Hoose might have suffered a mild heart attack, though a likelier culprit was probably heat exhaustion and dehydration.  Following the concert, members of the Richmond Symphony Orchestra, who were also present to perform that evening, led the audience in a standing ovation for Hoose and the Municipal Band.

Hoose finished out his conducting career with the Municipal Band without further incident, but he realized the time had come for him to lay aside his baton.  He turned in his resignation to the Band’s Board of Directors effective January 31, 1980 following a 23 year tenure as Music Director and 36 years as a member of the Band.  In his retirement Hoose pursued his lifelong interest in painting, worked on his stamp collection, honed his woodworking skills and built a greenhouse to aid his interest in gardening.  He died peacefully on November 1, 1985 at the University of Virginia Hospital after a brief illness.

A short article in the Daily Progress of November 2, 1985 stated:

Hoose’s proudest moment as municipal band director was a July 5, 1976 concert at Monticello attended by President Gerald R. Ford.  Hoose said the bicentennial performance was so polished “the Secret Service accused us of bringing in some ringers, of using professional musicians.  We really outdid ourselves that day.”

Sharon Hoose stated on several occasions during his career that his goal was to make musicians out of mere players.  As the above quote implies, he attained and even surpassed that goal as Music Director for the Municipal Band.