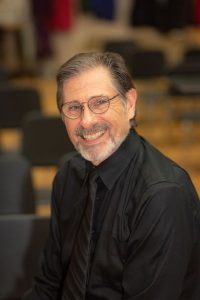 In his 1928 autobiography Marching Along: Recollections of Men, Women and Music legendary band master and March King John Philip Sousa wrote:  “Strange is the boy who doesn’t love a band.”  Not quite thirty years later one chilly October afternoon in Defiance, Ohio, a couple took their four-year-old son to see a Halloween parade.  The band marching in that parade so upset the youngster that he ran away.  That boy was Steve Layman, and fortunately for hundreds, if not thousands, of high school and college musicians—not to mentioned members of the Charlottesville Municipal Band—young Steve overcame his initial dislike of bands to become an outstanding musician, teacher and conductor.  And ultimately he became the seventh and current Music Director and Conductor of the Charlottesville Municipal Band, now known as simply The Charlottesville Band.

Stephen Richard Layman was born on October 12, 1953, the eldest of six children.  His parents, John Henry and Elizabeth Theresa Layman, were not instrumental musicians but did sing in both high school and church choirs.  When Steve was in the second grade, the Layman family moved to Toledo, where Steve attended a Catholic elementary school and also sang in a church choir whose director had at one time worked with the famed Vienna Boys’ Choir.

Steve joined the St. Francis de Sales High School band the summer before his freshman year, beginning his wind instrument career on the French horn.  Later he would add trumpet, flute and saxophone to his high school instrumental arsenal.  As it happened, Steve’s high school band director, Edward J. Zapletal, Jr., had once played tenor saxophone with jazz drummer Gene Krupa’s big band, so a great deal of Steve’s and his band friends’ musical repertoire was jazz oriented.  Amazingly, Steve claims not to have played a Sousa march until he was in college!

While a high school student, Steve formed a 7-piece dance band with other members of his high school band.  He played trumpet, tenor sax and flute in this group, which performed for dances at VFW halls and other gigs that their band director tossed their way.  Steve and three other members of the dance band also formed a jazz rock fusion band that played for school dances and parties.  In this group Steve played guitar, which he had also been studying since 7th grade.

When it came time for Steve to head off to college he chose Ohio Northern University in Ada, Ohio, a small liberal arts school of around 3,000 students located about 70 miles southwest of his hometown of Toledo.  As a music student at ONU majoring in trumpet and tuba (a long story, he says), Steve played in the symphonic band, jazz band, brass ensemble and pep band.  He also sang tenor in the University Singers, the music department’s select 32-member choral ensemble.

After graduating from ONU with a BA in Music Education, Steve packed up his tuba and headed south to graduate school at the University of Kentucky in Lexington.  There he majored in Music Education and tuba, studying privately with Rex Connor, the first full-time instructor of the tuba and euphonium hired at any American university.  While at UK Steve taught music theory, managed the concert hall, and filled in as Mr. Connor’s tuba studio instructor when he was on sabbatical.  In 1977 Steve auditioned for the U.S. Army Band but didn’t make the cut.  Subsequent to that event, he interviewed with Jim Simmons for a job as band director at Walton Middle School in Albemarle County, and based on that interview and a handshake with superintendent Tom Hurlburt, Steve and his wife, Alice, arrived in Charlottesville in July 1977. 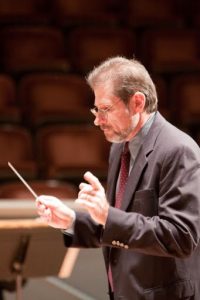 Steve hit the ground running.  In short order he joined both the Charlottesville/UVA Symphony Orchestra and the Municipal Band.  After teaching at Walton for nine years Steve was hired as director of bands at Western Albemarle High School in 1986, where he would continue teaching until retiring in 2008.  During his tenure at Western his concert and jazz bands consistently received superior ratings in local, regional and national festivals.  He would also be one of the first persons inducted into the Western Albemarle High School Fine Arts Hall of Fame.

In addition to his musical duties at WAHS Steve participated in a number of other musical activities in and around Charlottesville and across the state.  During the 1980s and 1990s he played in a small dance band called The Memory Makers and later in the Sentimental Journey and Salute to Swing Big Bands.  He also played in orchestras for the Oratorio Society of Virginia and the Virginia Consort Festival, as well as singing in the Consort itself.  During the mid-1980s he directed the UVA Symphonic Band and the UVA Brass Ensemble for five years, substituted with the Richmond Symphony, and directed the Charlottesville Youth Orchestra’s wind and brass ensembles.  In addition, Steve directed the James Madison University jazz band, supervised student music teachers for JMU, and taught brass lessons and music theory at Piedmont Virginia Community College.  And last but not least he directed church choirs at the Church of Our Savior and at Christ Episcopal Church, where his wife Alice served as organist.

Steve quickly became a valued member of the Municipal Band.  His ready wit, friendly camaraderie and musical talent soon made him a key player in the Band, first in the tuba section and later as leader of the trombone section.  He also served as the Band’s President in 1998 and again from 2002-2005.  In addition, as the years went by, Steve became Jim Simmons’ de facto assistant conductor, leading the group whenever Jim had to be absent and often directing featured numbers on various concerts throughout the year.  When Jim announced his retirement from active conducting, the Band’s Board of Directors quickly chose Steve as his replacement, and starting with the 2007 season he assumed the podium as the seventh and current Music Director and Conductor of the Band.

From day one Steve set out to take an already good band and elevate it to the level of a great band.  During the first decade of his tenure as Music Director, Steve introduced over 350 new pieces of music to the Band, many of them challenging selections from the world of contemporary wind band repertoire.  At the same time he honed his players’ skills and demanded a level of excellence that the Band had not exhibited for many years.  Nor did he neglect many of the familiar audience favorites of past years, but through attention to detail and providing new insights into those pieces, he and the Band breathed new life into them.  In addition, Steve instituted new avenues for the Band’s musical activities.  The one of which he is most proud was organizing the Band’s cadre of small ensembles.  Sensing the need for a way to have the Band reach audiences in settings where it was not possible or feasible for the full band to play, Steve encouraged members to form small group ensembles that could take music to retirement communities, nursing homes, book shops, wineries, social gatherings or anywhere else the Band was asked for music.  As of this writing nine different ensembles reach out to the Charlottesville and Albemarle communities with dozens of free programs each year.  And beyond these musical accomplishments, Steve also guided the Band’s Board of Directors through many projects designed to keep the Band financially strong and its facilities efficient and up-to-date as the organization moves into its second century.

When not on the podium leading the Band, Steve turns his attention to hobbies that include model railroading and astronomy.  In this latter capacity he participates actively in the local astronomy club, teaching a community astronomy class each fall and spring and managing a telescope loaner program for the University of Virginia Department of Astronomy.  When not conducting or making music, his favorite activity these days is playing with his grandchildren and traveling to new places around the world—preferably by train whenever possible! 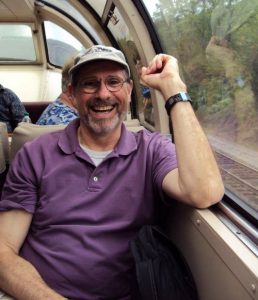